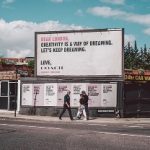 In today’s digital landscape, most modern businesses use tools like social media, PPC advertising, blogging, and SEO to help them reach their target audience and grow their operations.

However, we used practically none of these advertising technologies if we looked back only about twenty or thirty years ago.

Or, more precisely, we were using them, but with nowhere near the same prevalence we see today.

Back then, advertisers and marketers had no choice but to rely on more conventional advertising mediums, such as billboards, newspaper ads, TV commercials, and business cards, to get their names out there.

That said, many of you are probably wondering if these traditional forms of advertising are still influential today.

Below, we’re examining how the advertising industry has changed over the past couple of decades.

What Exactly Is Traditional Advertising?

Traditional advertising is most often used to refer to any form of mass media where a commercial message is distributed to a broad audience.

Generally, traditional advertising forms are used by businesses to push their products or services in front of an audience, regardless of their interests or any other demographics, such as age, gender, interests, etc.

While these methods for advertising products or services have never been entirely ineffective, they do lack many qualities that are today found in digital forms of advertising, which has led to the prevalence of PPC advertising on platforms like Google or Facebook.

The Rise of Digital Advertising

Without a doubt, digital advertising has become the clear leader in the world of business advertising and marketing.

One recent study by Medium on ad spending in the US from 2000 to 2020 showed that all traditional forms of advertising had seen a significant decline in the past 20 years.

Why Is Digital Advertising So Popular?

Unlike traditional advertising, digital advertising tends to be more targeted, which means that marketers can fine-tune their process to show ads only to the people who are most likely to interact with their brands.

On the other hand, when you think of a billboard, sure, it might get thousands of views per day.

But there’s no guarantee that the people viewing the ad will be interested in the product or service on display.

With digital ads, marketers can create highly targeted campaigns. Their ads are only shown to people within exact demographics, including targeting ads based on age, gender, geographic location, hobbies, interests, and more!

Are Billboards And Traditional Forms Of Advertising Still Effective?

However, they’re not nearly as popular or as effective as they once were.

And as an increasing number of businesses and brands continue to flood the internet to reach their target audience, we should only expect to see an increase in digital ad spending in the coming years.

It will also be interesting to see how new, developing technologies, such as artificial intelligence, virtual reality (VR), and augmented reality (AR), will be leveraged in the coming years to increase the effectiveness of digital advertising.