Is American racing toward a tyranny? Fearing he will lose the election, Trump is pulling out all the stops to dampen the vote. Trump said he is blocking billions in USPS funding to prevent voting by mail. Trump vowed to block any pandemic relief spending bill that includes the $25 billion in emergency funding for the USPS, declaring mailed-in ballots are fraudulent.

The ridiculousness of this claim is the fact that 1 in 4 cast in 2016—about 33 million—were sent by mail.  Without taint of fraud, five states (Colorado, Hawaii, Oregon, Washington, and Utah) use mail-in ballots exclusively, electing Republicans as well as Democrats: Even the Trumps vote by mail in Florida.

With the U.S. in midst of the coronavirus pandemic, people need to be able to safely cast their ballots without fear of catching COVID-D.

In furthering his effort to dampen down mailed ballots, he caused the appointment of a compromised Republican donor to run the post office, the first non-career postmaster in generations. This appointee owns stock in shipping companies that could benefit from a reduced post office or by contracting for postal functions. The Postal Inspector General  is looking into this. Treasury Secretary Mnuchkin summoned Republican members of the Board of Governors impressing on them what was wanted in a new Postmaster General. No formal notes were taken because less than a majority of the board was present and Mnuckin thus avoided complying with the Public Records Act.

In June, USPS officials told union officials that management was getting rid of 671 sorting machines, about 10% of the machines in the country. The sorters were the kind that handled letters and postcards, not magazines and large envelopes, but are suited for handling mailed ballots. In addition, mailboxes have been removed, overtime pay cut and experienced managers removed or reassigned.  Many of the removed sorters were in states that are political battlegrounds. A letter was sent to 46 states advising them to expect delays in processing mailed-in ballots in time to be counted.

The documents released by Representative Maloney show a 7 to 9% decline in mail delivery going back to July. including in First-Class, Marketing, Periodicals, and Priority Mail. “After being confronted on Friday with first-hand reports of delays across the country, the Postmaster General finally acknowledged a ‘dip’ in service, but he has never publicly disclosed the full extent of the alarming nationwide delays caused by his actions and described in these new documents,” said Chairwoman Maloney.  “We have heard directly from our constituents, and these new documents show that the delays are far worse than we were told.”

Buckling to public pressure and the threat of lawsuits by 20 states, the Postmaster General Louis DeJoy announced he’s pausing changes ‘until after the election.’ “To avoid even the appearance of any impact on election mail, I am suspending these initiatives until after the election is concluded.” DeJoy will not undo the damage he has done. He has no intention of replacing the high-speed sorting machines, blue mailboxes, and other key mail infrastructure. Postal employees are forbidden from reassembling mail sorting machines

In addition, he adding roadblocks to voting. Several states, including Alaska, require absentee ballots to be signed by a witness who verifies the ballot was completed by the voter submitting it. The new postmaster issued a new rule that postal service employees can not be witnesses while on duty, as they have customarily done.

The U.S. postal system precedes the creation of the country by one year. It was created in 1775 and Benjamin Franklin appointed the first Postmaster General by the Continental Congress. Then the Constitution provided in Article 1, “Congress shall have the power to establish Post Offices and Post Roads.”

The implementing legislation is codified in Title 39 of the U.S. Code. It states:

“The United States Postal Service shall be operated as a basic and fundamental service provided to the people by the Government of the United States, authorized by the Constitution, created by Act of Congress, and supported by the people.”

Now our soldiers around the world depend upon for mail from home, seniors and veterans get medicine by mail, unemployment checks go out by mail, and the post office remains part of the structural backbone of the nation.

Under normal circumstances, what Trump does would be impeachable offenses.   A legal argument can be made that hindering the post office is an attack on the voting rights of Americans.”

Trump is hamstringing the post office so people might not be able to safely vote in the November election. Holding back funding means “they can’t have universal mail-in voting, they just can’t have it.”  All the evidence points to his calling the election results void and attempt to hold onto the office.

low incomes who otherwise do not have a bank would benefit.

Postal banking previously existed in the U.S.  Known as “poor man’s banks,” post offices offered a number of financial services between 1911 and 1966, including savings accounts with modest interest rates. Postal banking was particularly needed during the Great Depression, when many commercial banks failed.

Postal banking will in time increase revenue for the post office.  Small-dollar loans for consumers that offer low fees and low-interest rates can replace payday loans which are extraordinarily expensive with annual percentage rates near 400 percent and help keep the poor “poor.”

Mehrsa Baradaran, author of “How the Other Half Banks” and “The Color of Money: Black Banks and the Racial Wealth Gap” recently authored a report stating three key improvements to our current banking system that postal banking could accomplish:

Donald Trump, who has already vowed to veto the bill to fund the post office for the election, if it somehow makes it past Mitch McConnell’s Republican Senate, predictably spent most of the day golfing, but as always, he still found time to complain about the Postal Service and spout his unproven yet insistent belief that voting by mail is only okay when he’s doing it and it’s called “absentee voting.”

According to documents, obtained by House Oversight Committee chair Carolyn Maloney: “These steep declines did not start in April or May when the corona crisis hit us, but in July when Mr. DeJoy came on board and began making his changes.”

The report specifically notes a “marked decline” in-service performance for priority mail starting the week of July 11, about a month after DeJoy assumed the reins. At the beginning of July, priority mail was delivered on time more than 90% of the time, but by the start of August, priority mail deliveries were on schedule less than 80% of the time. DeJoy really worked some magic there.

Serving Americans in new and needed ways is a  win-win for people and the post office. The big banks will continue to do well and only those who bleed the poor will be left out. These are not normal times and we need to look to some fundamentals to save the post offices and prevent turning the United States into Trumpistan. 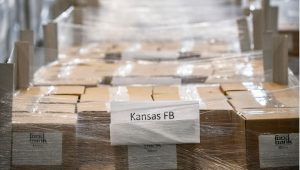 Postmaster General Louis DeJoy allegedly pressured former employees to donate to Republican candidates he supported and then reimbursed them with large bonuses, according to multiple media reports.

Both The Washington Post and The New York Times said Sunday that DeJoy, a top Republican fundraiser and Trump megadonor, urged workers at his former business, New Breed Logistics, to write checks to lawmakers for more than a decade between 2003 and 2014.

Federal election laws prohibit straw-donor donation schemes, in which individuals bypass political donation limits by reimbursing others that effectively donate on their behalf. The New York Times notes it is legal, however, for people to encourage their employees to donate.